My day can change in five minutes.
Then we have the absence/petit mal siezures. These can last from ten seconds to almost a minute and occur with no warning. If I am standing, I will fall. A good day is two to five seizures. A bad day is ten to fifteen.

Both a dystonic storm and an absence seizure are far more likely to occur when I’m tired and have had a lot of brain stimulation. But sometimes they occur for no reason at all.

In November of 2014, we had a panel of labs done which showed that I was in remission of Lyme and all co-infections. When I began to have an increase of seizures and other neurological issues, my doctors feared a relapse. They had done everything they knew to do, and don’t know what to try next.

We did a lot of research. In our exhaustive search of the internet, we found a video made by Justin Vanderham of his wife, Christa’s, battle with Lyme disease. Her story and symptoms are similar to mine, with the exception that she is now totally healthy.

Of course that grabbed our attention and we started looking into what her “magic pill” had been. Now it’s a very long story, watch their video here, but in short, after months of IV antibiotics they discovered that Christa’s body was unable to rid itself of toxins on its own. They began to use a powder that acts as a magnet, binding the toxins and then flushing them out of the body.

They also discovered Fry Laboratory in Pheonix, Arizona. This laboratory has been on the cutting edge of research on Lyme Disease, it’s co-infections, and tropical diseases. They are very thorough and the most comprehensive of any I’ve used.

Through extensive blood testing they found Christa was positive for a certain type of Protozoa. She had done a lot of international travel beforehand she got sick. Perhaps she was infected during her travels or, as my doctor tells me, a tick can deliver borrelia burgdorferi as well as protozoa in the same bite. 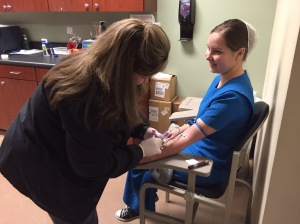 My doctor did a preliminary panel which showed, as before, a remission of all things Lyme. They also tested for the same Protozoa for which Christa Vanderham had been positive. This was negative. However, they did see another type of Protozoa.

Yesterday I went in for more labs. A lot of lab work! They are testing especially for tropical diseases of the Central American corner of the world.

I have done quite a bit of traveling, and haven’t exactly stayed in areas tourists consider safe or attractive. I’ve waded barefooted through flood waters, I’ve drunk rain water caught in a cement water tank, and I’ve eaten the most amazing food you can imagine from street vendors in multiple countries. Once I was stung by the infamous “docta fly” of Belize, twelve times on my right foot. The swelling was so bad, my foot could scarcely fit into my flip flop. So it is possible to have contracted an uninvited guest.

Perhaps you think I endangered myself by not being more careful. But the truth is, God controls what happens. Of course I must not be foolish, but what I’m trying to say is that my traveling companions ate the same food, drank the same water and hiked through “the bush” (jungle) right behind me. They did not become ill. It wasn’t God’s plan for their lives. Their journeys have included trials I have not faced.

So if you find yourself traveling in a third world country, leave your thigh high boots at home, refrain from drinking river water and trust God with your health.

But I digress, forgive my sermon!

We don’t know for sure what has invaded my body but it seems to be a type of Protozoa. Whether its mode of transportation was a tick or some hungry Central American parasite, we do not know.

We have an appointment with the doctor who founded Fry Laboratory and has spent considerable time researching these diseases. Whether or not he can help me is yet to be determined. But our options are few. If this trip doesn’t give us the answers we need, we are considering the Mayo Clinic.

I am taking the powder, Cholestyamine, to help with my own detoxification. I have had good results so far with minimal side effects.

Perhaps March 29th will the start of a journey to better health. While I would love to be perfectly healthy with no pain or seizures, I want to joyfully submit to God’s plan for my future.

13 thoughts on “Be Joyful in Hope”